Vulcan is an electronic (capacitive) impulse based, eco-friendly water treatment system that solves your problems with scale and rust. However, there are other units available that are based on other principles.

Salt-based water softeners (so-called ion-exchangers) are using salt and chemicals to treat the water. They are installed into the piping system which should only be done by a professional plumber. They exchange the minerals (calcium and magnesium ions) with twice as much sodium (salt) ions. As calcium and magnesium gets deleted, the water is softer afterwards. This way softeners considerably increase the sodium content of the water which can cause considerable health threats and certainly is a threat for the environment. 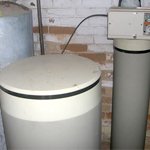 Burning money: Regular water softeners are not only expensive to purchase but also you will need a specialist to do the installation. Once in place you will have to constantly refill it with salt.

Never-ending maintenance: Maintenance includes the constant refilling with salt, the washing of the granule and the checking of valves and measuring station. Wasting resources: softeners require large amounts of salt and huge amounts of additional water of up to 30-80 gallons per wash (~110-300 l) to operate. Water softeners need a lot of manpower as they constantly need to be fine-tuned and controlled. Especially season-related changes of the water quality (summer/ winter ) are often simply forgotten to consider for the programming. The human error factor then prevents the unit from performing correctly.

Health issues: Babies, children, elderly people, people with salt-restricted diets or anyone who is health-conscious should consult a physician regarding the sodium intake increase when using a water softener. The water loses its natural taste and may even taste salty. Also you may have to supplement the important minerals calcium and magnesium in your daily diet. It is important to note that many of the water softeners have a by-pass feature that will allow you to bypass the cold water in the kitchen. This will enable you to use unsoftened water for drinking and cooking. In addition, bypassing the cold water tap in the kitchen will prevent minerals from being removed from the water. However, then only part of your pipes are protected.

– … is that always a good idea?
– … is it necessary to have extremely soft water?

The answers are simple: No. and No.

Hard water is a real nightmare as long as the scale builds deposits. The minerals calcium and magnesium in itself are good substances. Once you minimize the adhesiveness of the scale, it no longer bothers you as deposits but you can benefit from the healthy minerals. Very soft water is also not recommended for pipes as is might damage them (the soft water is too acidic).

Legislation and the Environment

The environment Water resources are a valuable good. We require large amounts of fresh water but only 2.5% of the Earth’s water is fresh, and over two thirds of that is frozen in glaciers and ice caps. The use of water softeners contributes to a decrease in the available fresh water on our planet. Therefore, it is important to use eco-friendly technologies and stop harming the environment.

For the above mentioned reasons and mainly due to the great threat to the environment, the US government has started to ban softeners. Vulcan vs. Softeners

Vulcan is NOT a magnetic system. It works exclusively with impulses. The energy is simply taken from a power plug. We would like to distance ourselves from those devices that use the force of magnetism to treat water.

At first sight, an electromagnetic unit may look similar in principle. However, Vulcan operates differently: it works with an electronic control unit that produces the impulse signals. These signals are transferred onto the impulse bands which are connected to the acrylic electronic control unit. In comparison, most electromagnetic units also have some sort of plastic box from which there are some cables emerging. The electronics in the box produce electricity which runs in the electric cables and come back in a loop. You will easily recognize that the cables run back into the box. This way, the cable acts as an electromagnet. Again, the Vulcan-impulse-bands do not run back, but end on the pipe. 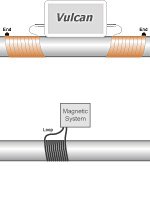 Why you should avoid magnetism when treating water

Magnetic-based physical water treatment devices produce electric impulses by induction. This means that the magnet(ism) together with the water that flows through the pipe are supposed to generate complex electric impulses. This sometimes gets achieved. However, the following problems with magnetism cannot be ignored:

Generating a complex electric impulse field only works if the water inside the pipe flows by the magnetic field with high speed (= velocity/ flow rate) at a minimum of one meter per second (~ min. 3.3 ft/sec). If this is right, then the impulse can be generated. However, if the flow rate is not right (too slow), the impulses are not generated efficiently. kalk_scale_arrow_grey We believe that it is the best to always provide a perfect and stable electric impulse field simply by sending out the impulse signal via the impulse bands. Therefore, Vulcan is solely electric. The annual power consumption of Vulcan is minimal and amounts to approx. 5-7 US$ (~ 4-5 €) per year.

2. Problem with Magnetism: not all pipe materials can be treated equally good

As the magnet does not penetrate through metal very well, many distributors ask to install their units on plastic pipes. If the installation place is a metal pipe their recommendation is to cut out a piece of pipe and to replace it with a piece of plastic pipe. kalk_scale_arrow_grey We believe that this is an unnecessary complication to work with. Magnetism has its limits with the treatment in general and in addition should be installed on plastic.

3. Problem with Magnetism: Magnetism itself

Magnetism is a powerful force indeed. It is attributed with many positive effects on organisms. However, everyone also knows that magnets attract metallic objects, no matter how small. This again leads to a major problem when magnets are used on a piping system. The area where electro-magnetic systems or permanent magnets are installed is of course magnetic. Here, all magnetic particles in the water are firmly connected to the inside of the pipe. This happens on metal and plastic pipes alike. After only a short while the inside of the pipe is covered with a metal-dirt-particle-film that is a perfect breeding ground (biofilm) for bacteria or other unwanted substances. Many producers of magnetic devices therefore suggest to turn off the unit and “flush” the pipes every six months as a solution to the problem. kalk_scale_arrow_grey We believe that building up a potential dangerous biofilm with magnetism in order to treat the piping system is not a smart way to solve the scale problem. Also, we know the need to clean the pipe with flushing or brushing can be avoided. The answer is not to use magnetism.

Legislation and the Environment

The environment Water resources are a valuable good. We require large amounts of fresh water but only 2.5% of the Earth’s water is fresh, and over two thirds of that is frozen in glaciers and ice caps. The use of water softeners contributes to a decrease in the available fresh water on our planet. Therefore, it is important to use eco-friendly technologies and stop harming the environment.

Vulcan offers you a reliable eco-friendly water treatment system against scale and rust – without the drawbacks of magnetism.
Vulcan not a magnetic system
No Treatment At All

You currently do not have any treatment against scale but suffer from hard water?

If you live in an area with hard water, than it is essential to find a solution that protects you house, building, business or production site from aggressive scale deposits.

These are the typical problems caused by hard water:

Open chat
Powered by
Please select an option to get started.
Which purpose you are looking for

“Our customer executive will reply you shortly please be waited”